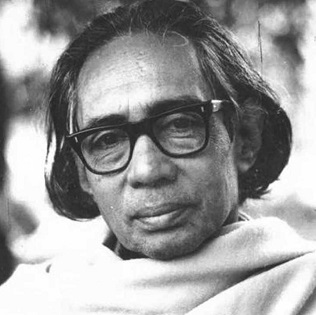 Somnath Hore (1921-2006) born in Chittagong, now in Bangladesh was an Indian sculptor and printmaker. Hore learned the methods and nuances of printmaking, mainly lithography and intaglio, at the Government College of Art and Craft in Calcutta. By the 1950s he was regarded as the premier printmaker in India. Hore invented and developed various printmaking techniques of his own, including his famous pulp-print technique, which he used in the critically acclaimed Wounds series of prints. In his youth he became affiliated with the Communist Party. His sketches, sculptures and prints were a reaction to major historical crises and events of 20th century Bengal. In 1943 he did visual documentation and reporting of the Bengal famine for the Communist Party magazine Jannayuddha (People’s War). His coming of age as an artist coincided with the 1946 peasant unrest in Bengal known as the Tebhaga movement.  His socialist ideologies combined with his anticolonial focus in his practice established him as a Modernist icon of the Indian subcontinent. Somnath lived most of his later life at Santiniketan, where he taught at Kala Bhavan, the art faculty of Visva Bharati University. In the 1970s Hore started making sculpture. His contorted bronze figurines recalled the agonies of famine and war, and became iconic emblems of modern Indian art. Hore exhibited widely during his lifetime in cities including Kolkata, New Delhi, Mumbai, Bangalore, and Amman. His works are in the collections of Lalit Kala Akademi, the National Gallery of Modern Art, New Delhi, the Indian Ministry of Education, and the Bahai Museum, among others. He was a recipient of the Indian civilian honour of the Padma Bhushan.